At Vetrica we have an informal atmosphere, aimed at making you and your pets feel as comfortable and relaxed as possible. Never be afraid to ask one of our friendly staff for help if you are at all unsure about any aspect of your pet’s health and welfare. 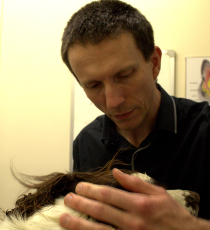 After qualifying as a vet from Glasgow University in 1991, Bob spent several years working at a number
of locations around Britain before finally settling in Rosyth.

Married with three children, Bob set up Vetrica single-handedly in December 2001, aiming to work to
the highest standards giving the best possible service. In his spare time, he’s to be found wandering
the forests of Blairadam with his two hooligan spaniels, Fester and Pudding.