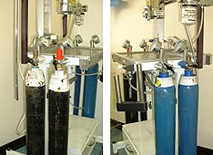 This picture shows the gas canisters that carry the isoflurane and form the bulk of the inspired (breathed in) gas. The black bottles contain oxygen, the blue ones nitrous oxide.

Excluding the cost of delivery and cylinder rental, nitrous oxide costs us almost three times as much as oxygen.

As with isoflurane, despite the increased cost, there are significant advantages to using a mixture of nitrous oxide and oxygen, than oxygen alone. It is a very useful pain relieving agent – the common name for nitrous oxide is Laughing Gas, and is used widely in humans during anaesthesia, dentistry and to relieve labour pains. This pain relieving effect reduces the amount of other anaesthetic agents that are required, and allows a lighter anaesthetic than would otherwise be the case. The effect of nitrous oxide is very rapid in onset. This means that when it is used, animals are more easily revived when it is withdrawn, than would have been the case were it not to be there. Put simply:

Most anaesthetics are safer when nitrous oxide is used than when not.