Dogs Will Be Dogs 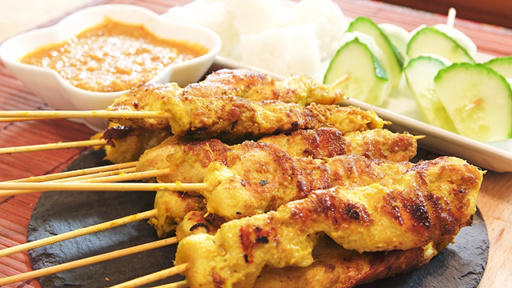 Dogs are natural scavengers, and for some their catholic eating habits get them into trouble on a fairly regular schedule.

Young dogs especially are prone to picking up rubbish and eating it. I’ve lost count of the number of times I’ve seen my own dog eating something in the distance, and of course chasing after him just makes him swallow it faster! 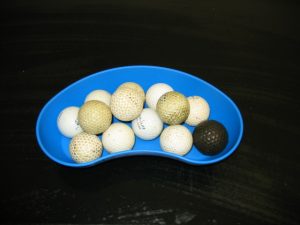 I once took this basin full of golf balls out of a Labrador’s stomach.

The dog’s owner was completely oblivious to the fact that there was anything wrong until he saw him swallow a golf ball.

But older dogs generally know better, and little dogs are usually more discerning in their tastes than a young Labrador. So it was with some surprise that we recently removed this from an extremely tiny, elderly Yorkshire Terrier’s stomach. 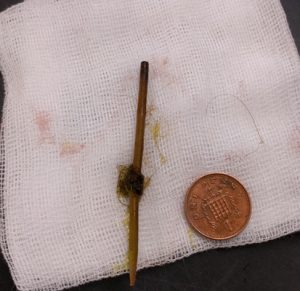 A chicken satay skewer that was swallowed whole.

This is a skewer that once had chicken satay on it (ignore the penny, that’s just there for scale). I eat this quite a bit, though fortunately I wasn’t responsible for this dog at the time. It boggles the mind how a dog could swallow such a thing.

So do please take care with waste food and the packets and implements associated with it. We’re storing more waste food in our homes now than ever before due to the household recycling requirements, and given the chance, your dog will eat pretty much everything in your food waste bin.